This article appeared in Gripped in 2011 and was written by Toronto-based Katherine Smith.

Terri Frank, 43, was hurtling through the Kentucky air for what seemed like an interminably long period of time. Seconds before, she had been in the middle of the heady crux on No Place Like Home, the prominent arête visible from Highway 11 at the Red River Gorge. She had summoned her last bit of energy and reached around the arête for a small hold, but came up short.

She was now plummeting to the ground, the rope seemingly suspended in mid-air and I knew shortly I would be abruptly pulled up the cliff. On landing, was she shaken? Not quite. Instead, she laughed as if it were the most casual thing in the world, and proceeded to pull up the rope, only to take the whipper again. Then, on her third try she decisively stuck that move. 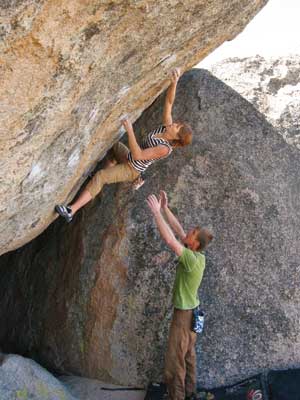 It is said inspiration comes from the most unlikely sources, and here was a regular woman who was pushing her personal limits in a way I had never seen before at any crag. Would this be something I would still be doing more than a decade in the future? Over the past year, I had done a lot of thinking about how to reconcile my love for climbing, with my desire for a career, a home, and a family, and here Frank was, climbing her best and loving life, a living example of what was possible. I soon found out, she’s not alone.

“I was a prairie girl looking for an adventure sport. Partying and snowmobiling weren’t cutting it anymore,” says Jan Ito, 44.  Spending her first year climbing in Hueco Tanks and Bishop 20 years ago, she said she was hooked for life. Abandoning her roots and quitting graduate school, she moved west in search of a simpler life with less stress.

Now, working in Recreation helping people lead more active lives, she loves a good steep sport climb, and tells tales of her Blow the Flash Tour at the Red River Gorge, and creating the term highpointing to describe the fun she was having whipping off her project in Kalymnos.

As she ages, she doesn’t think she is getting any stronger, but says she has a few more tricks up her sleeve. Her attitude is ‘try as hard as you can, as often as you can get out, and never get grumpy about failing – better to chuck another lap.” Asking about her experiences as a woman in climbing, she quips, “I get a better spot than I give.” 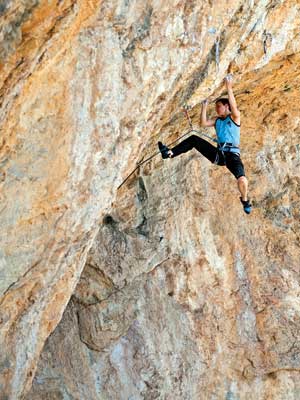 Like Ito, Ellen Powick, 40, moved in pursuit of more year-round climbing. After she got married in 1998, she and her husband quit their engineering jobs in Calgary and took a one year honeymoon road trip though the USA. “Our family and some friends thought we were throwing our careers away,” she says. On the contrary, she is now settled in Salt Lake City with a job she enjoys, and with her 2010 redpoint of The Pipedream, a 5.14a, in Maple Canyon, Rock and Ice reports she may be the first Canadian woman to redpoint a climb of this grade.

She says her goal is to do more 5.14’s. “I love the movement of climbing, and the progression from not being able to do a move or route, to slowly working it out with a minor hip adjustment or foot placement so that something once impossible becomes possible.” 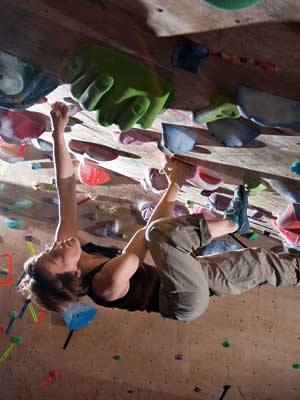 Perhaps to buck the trend, Christine Triggs, 41, moved to Ontario from Alberta to enhance her climbing after meeting a motivated group of Toronto climbers during one of her annual pilgrimages to Hueco Tanks.

Road tripping on her own in the early 90s, she has observed a significant increase in female climbers, and mentions that she discovered her passion for climbing on her own, saying back then the majority of girls climbed because they were travelling with their boyfriends. Jany Mitges, 44, thinks “a lot of women have gotten into it because of their male partners, and many are not as addicted to it as men. They don’t grab onto it, and a slight amount of risk scares them away.” 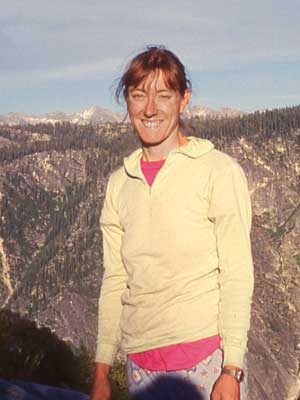 Not everyone has the ability, or desire to move. Karen McGilvray, 50, owner of the successful Rock Oasis climbing gym in Toronto took the added step of making climbing her career. An avid traditional climber with an MBA, she decided not to pursue a corporate path, and in 1998 made the bold move into entrepreneurship. It all began in 1987 after hiking in Israel.

“Friends suggested I would like rock climbing. I had never thought about it before, but as soon as I heard the words I knew that was what I wanted to do.” Among her proudest moments she says were the birth of her son, the day she opened her gym, and climbing the Nose on El Capitan. “Every day events are super special too,” she points out, “[sometimes big] events are too fleeting.” 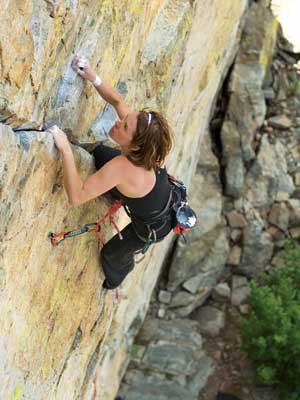 In contrast, Calgary based Jean Blake-LeBlanc, 41, left a job that enabled her to climb more, for one more demanding and fast paced, “I knew when I made the decision it was based on my future in oil and gas, and not climbing.” She says her career is important. “It’s easy to head back downtown after a weekend in the mountains, especially when I know another weekend is coming soon.”

She recently sent three routes in Rifle without kneebars, and jokes that she wasn’t sure “if the locals were impressed, or just thought I was stupid.” She is most motivated by her girlfriends. “They are all older than me, and routinely kick my butt.” Frank also says she is more motivated by female climbers than men.

Like Blake-LeBlanc, Powick and Triggs echoed the importance of their careers, saying they are motivated by mental challenges at work, in the same way as difficult routes. Also, Powick says, “sitting behind a computer for 50 hours a week motivates me, and makes time out on the rock or training that much more important.” Mitges agrees a job is important, but is quick to say “my life is focused on my husband, living life to the fullest and ensuring all our friends have support.”

Climbing over decades has enabled many women to observe the increase in people at gyms and crags as climbing becomes more mainstream. Blake-LeBlanc notices the increased numbers of cars at crags and notes, “people always have their laptops with them. I wonder if they update their 8a card before they start the car.” Triggs, sadly, watched the disappearance of spandex, and duct taped sofa cushions as bouldering pads.

Regarding advice to younger climbers, Ito advises to be the best belayer at the crag, while Powick says, “when it’s safe, don’t top rope, and climb on as many different kinds of rock as you can.” Amazed at the opportunities young girls have today Triggs recommends “traveling and climbing while you’re young, and having fun.”

Blake-LeBlanc believes men are stronger and more powerful, but not smarter, “Why my husband feels the need to cut his feet lose and dyno when he could use the foot hold, and rock over is just a little beyond me!” Being just under 5’4″, Powick says “it’s easy to exceed expectations because people don’t always expect me to climb hard.” Mitges indicates she likes “proving a woman can smoke a boy’s ass and do it with style.”

She says she was doing some of her best climbing by the age of 40, and even today she is doing the best she can given her recent treatment for cancer. Some women have exercise regimens, ranging from campusing to bouldering to yoga to light weights and running. Triggs admits she has become more regimented, “I’m more focused in training and my time at the cliff. I realize I have limited time to get out, and I have to make the best of it. I also try not to focus on the result of my climbing and training days anymore, but instead what I can learn. It’s a work in progress.” 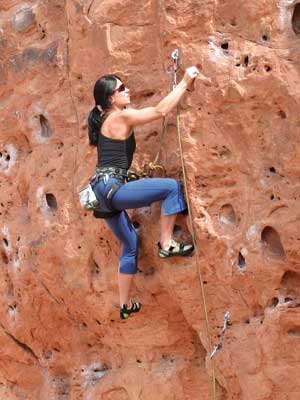 Some people don’t start climbing until later in life. With her daughter away at college, Gabi Rothenstein,45, started climbing at age 40 after pursuing many other sports, including sky diving. “It just didn’t do it for me,” she says. Attracted to the problem solving of climbing and reaching a balance of body and mind, she says her goal is continuous improvement, and she has made a conscious effort to focus on technique, “I used to think, hey, you’ve got legs too, so start using them!”

When asked how climbing has affected her approach to life, she counters by saying, “My approach to life is reflected in my climbing. Work hard, [push a little harder each time], be honest with yourself and others around you, and have fun while doing it.” Frank, like Rothenstein, is not overly focused on grades, “While I hope to send my hardest redpoint this winter in Thailand, ultimately my goals for climbing have more to do with [fitness], lifestyle, travel, and overall experiences.”

Of the women I spoke with, one exception granted, young children were not in the picture. “Parents need to adjust their climbing goals and expectations for a while,” says McGilvray.  But many people make it work. Taking advantage of parental leave, boulderer Katerine Martin, with her partner and newborn embarked on a four month road trip from Canada to Mexico, and back.

The well-profiled Jacinda Hunter, 32, mother of four, and nurse, recently redpointed a 5.14b, and describes herself as “a working mom with a hobby.” At a recent Tour de Bloc competition in Quebec, three of the six finalists were mothers. Looking to my own experiences, increasingly I am seeing children crop up at the crag, whether napping in carriers, playing in the dirt, or trying out a climb of their own. Once, I met a couple who brought a nanny to the crag so mommy and daddy could focus on their projects. It goes to show anything is possible with a little creativity.

It seems whether you move across the country or continent, or stay put, have a demanding career or not, climb 5.10a or 5.14a, it’s about the life you create for yourself, and the balance you achieve within of all your choices. Happiness research speaks of cross-level-coherence to describe when your personality, your coping mechanisms and your life line up. All of the levels interlock creating a sense of peace and purpose.

One of my favourite authors, Jonathan Haidt, pursuing his own theory of happiness says “love and [vital engagement] are crucial for human happiness, because when done well they draw us out of ourselves and into connection with people and projects. Happiness comes from getting these connections right; or more simply, happiness comes from between.”