Dupuytren’s Contracture has long been considered a rare disorder affecting an older population. The disease itself tends to present in people over the age of 40 and is almost unheard of among those younger than 30. In the last fifteen years, this quiet condition has made itself more apparent. In climbers, the onset of this disorder appears to take place earlier than in the normal person. As this rare connective tissue disorder forces the fingers into a permanently flexed position due to the abnormal thickening and shortening of the palmar fascia, this provides a bit of a problem. The contracture of these fibrous tissue bands impede mobility and complicate the act of climbing. 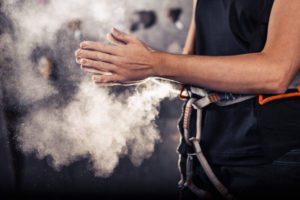 In most cases, the ring and small fingers are first affected. Dupuytren’s usually presents in these locations and affects both hands eventually. It is a chronic condition without an obvious “cure”  and often appears first as an abnormally thick nodule in the palm of the affected person. That affected person is also more likely to be male than female at a rate of four-to-one. The incidence of the disease increases after the age of 40, as well, though it usually presents in people with Northern-European ancestry. That said, it can occur in anyone.

That which causes Dupuytren’s to occur is still debated. There is evidence for a genetic component harking back to the ancestry of the affected patient. This does not appear to be the only cause, however, lending evidence to a micro-trauma component as well. According to the U.S. National Library of Medicine, the pathogenesis of Dupuytren’s has been compared to wound healing. What begins as an inflammatory response that produces superoxide-free radicals and hydrogen peroxide stimulates a reparative response in the fascia. According to this line of thinking, it is this healing response that leads to the thickening and shortening of the palmar bands.

A micro-trauma theory could be in-line with the early onset of the condition in climbers. Though the condition appears to affect an aging population with a greater propensity than a younger population, there appears to be evidence for climbing acting as a catalyst for Dupuytren’s.

In a study published in the British Mountaineering Journal, Dupuytren’s Contracture was found in a small number of climbers in their twenties. This opposes non-climber-specific studies in which the disorder develops in patients in their fifties or sixties. Though this study was far from rigorous, it does reflect trends. 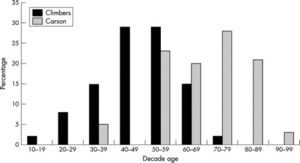 To better explore the topic, we spoke with Doctor Yasser El-Sheikh. El-Sheikh is a hand, wrist, and peripheral nerve surgeon at the University of Toronto with a special interest in climbing injuries. He is also an experienced climber of 30 years and Medical Officer of Climbing Escalade Canada.

El-Sheikh has noticed Dupuytren’s Disease develop early in many young-male climbers. He has operated on two male climbers in their twenties. A climber and writer at Gripped also developed the condition at the age of 20. This density of young climbers that are developing the disorder seems to lend some support to the theory that the condition develops due to micro-traumas of the hand.

Climbing is a repetitive process that places the hands under an unusual amount of stress and pressure. The tendons and muscles of the hand tear as a result of climbing. The study from BMJ appears to support the micro-trauma theory by finding a correlation between the intensity with which a person climbs and the development of the disorder. Still, not enough research has been done to draw any definitive conclusions.

Can you continue to climb?

El-Sheikh says, “Absolutely keep climbing. There are many conditions that can be aggravated by climbing or sports in general, but quitting climbing isn’t necessary.”

After a year and a half with the condition, the Gripped writer progressed three bouldering grades and continued to train with all of the same equipment as an unaffected climber. This includes hangboards, campus boards, and systems boards. These are some of the highest stress weapons in a climber’s arsenal, yet they can still be of use.

The skeptic might suggest that training would only aggravate the condition. El-Sheikh says, “This is unknown, but theoretically, yes, continuing to climb may stimulate the cords to grow and contract more quickly.” This is important to remember when you are at the gym.

Fortunately, there are treatment options that can help throughout the progression of the disorder. If you simply have a nodule or two, you probably do not require treatment. That said, speaking with your doctor is always advisable. If it does not get in the way of your life, however, treatment is probably not necessary.

This is largely the case due to Dupuytren’s high recurrence rate. Early invasive treatments can lead to more ready recurrence. To slow the progression of the disease, regular range of motion exercises, stretching, manual palmar fascia massage, and night extension finger splinting exercises are helpful.

Other treatment options include: 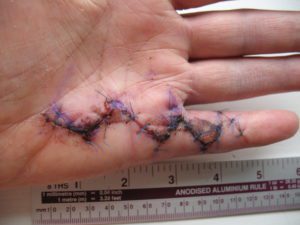 Though surgery is invasive, it takes a short amount of time to recover from and works well when performed. There are no guarantees with Dupuytren’s as there is still a lot to learn, but there are things that you can do to help your condition. Dr. El-Sheikh suggests, “Regular massaging and range of motion exercises, night-time extension splinting to keep the hand open throughout the night, low sugar diets, avoidance of repetitive hand trauma, not smoking and not drinking.”