Forty-four of Sport Climbing’s top athletes descend on the Espace Sportif des Quefets in Tournefeuille, France outside of Toulouse from Nov. 28 to Dec. 1 for the second round of Olympic qualifications.

The only Canadian competing is Alannah Yip. For a pre-comp summary and the starting list scroll down.

Throughout the entire IFSC World Cup 2019 series, climbers have been working hard for the chance to land high enough in the IFSC Combined 2019 rankings to receive an invitation to the greatly anticipated competition. Following the conclusion of the four-day event, 12 additional athletes will have earned quota places to the Tokyo 2020 Summer Olympic Games.

After placing 18th in the IFSC Combined World Championships Hachioji 2019, Adam Ondra missed out on earning a quota place for the Olympic games during the first round of qualifications. However, with a second place in the Combined World Cup 2019 rankings, he secured himself an undisputed ticket to Toulouse for a chance at redemption.

Japanese climber Keita Dohi, who earned one of Sport Climbing’s first Youth Olympic gold medals a little over a year ago in Buenos Aires, Argentina, is expected to compete for a second chance at Olympic gold.

Concluding a standout season in both youth and senior competitions that earned him a silver medal for the IFSC Lead World Cup 2019 series, Spain’s Alberto GINES LOPEZ is also heading to France. Let’s see if this rising star can cap off the year with the ultimate prize, an Olympic quota place. 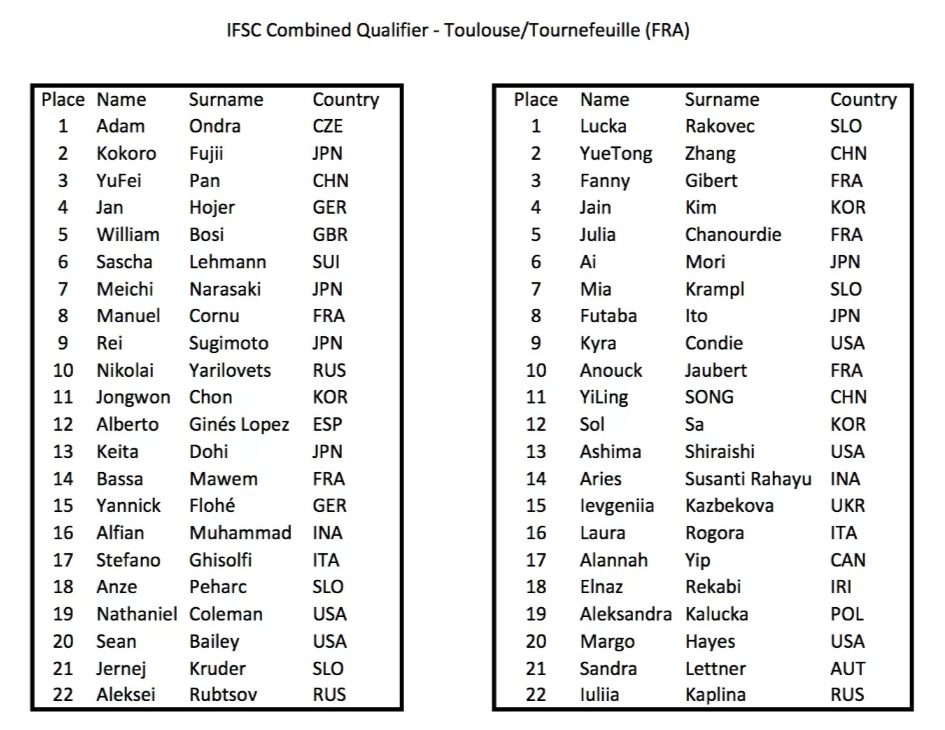 Another notable athlete to keep an eye on at the Olympic Qualifiers is speed climber Bassa Mawaem of France. He is aiming to claim his country’s second men’s quota place to join his brother, Mickael, who qualified at the Hachioji World Championships in August.

While crowd favourite, Janja Garnbret has already received a quota place for Tokyo 2020, another remains for Slovenia’s female athletes. Following strong performances and consistent appearances throughout the IFSC World Cup 2019 series, both Lucka Rakovec and Mia Krampl will be big contenders for one of the six places available in Toulouse.

Speed specialists, YiLing Song and Aries Susanti Rahayu made history this year by setting new women’s speed world records and now they find themselves facing a much larger historic opportunity. Due to the varying differences between climbing disciplines, a win in the speed event is key to landing at the top of the rankings.

Youth Olympic Buenos Aires 2018 gold medalist Sandra Lettner has already had a taste of Olympic competition and knows how to handle the pressure. With a top spot in Toulouse, she could have a chance at taking on an even bigger stage next year in Japan.

Breathe in, breathe out. ⠀⠀⠀⠀⠀⠀⠀⠀⠀ T-2 days until the next Olympic qualifier in Toulouse. ⠀⠀⠀⠀⠀⠀⠀⠀⠀ I’ve spent the past 11 days in Innsbruck getting in the final touches on my training. I am confident that I am ready yet I am more nervous for this event than any other in the past. ⠀⠀⠀⠀⠀⠀⠀⠀⠀ I really want to qualify for the Olympics, but I also know that I would be content if I didn’t. The work that I have put in, day in and day out, training and travelling and competing, was worth it no matter what. It’s a weird place to be in. Nervous because I want to perform and have an ideal outcome, but settled with either. ⠀⠀⠀⠀⠀⠀⠀⠀⠀ That being said, I’m ready to step out onto the stage and give it everything I have and represent the country I love so much 🇨🇦 See you on the other side ✌️ ⠀⠀⠀⠀⠀⠀⠀⠀⠀ Photo by @tallers_photopress ⠀⠀⠀⠀⠀⠀⠀⠀⠀ @arcteryx @scarpana @canfund @petzl_official @coastperformancerehab @climb.base5