In the past, onsighting was reserved for route climbing. Part of this comes from the nature of the discipline. Routes tend to be long which makes it difficult to accurately read the beta from the ground. In June we talked about whether onsighting can exist and determined that only a compromised form of the discipline is regularly approached by professional climbers. 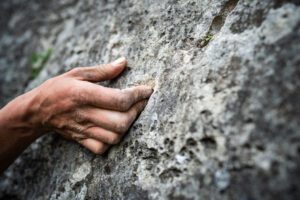 Only outlandish examples of onsighting managed to stick within the definition:

“To climb a route a route on the first attempt, without weighting gear, and without any prior information about the climb.”

We determined that without any prior information was nearly impossible to live up to. Bolt lines describe route direction, chalk marks describe beta, and pre-clipped draws, as in Ondra’s onsight of Just Do It, all obfuscate what it means to onsight a route. To that effect, knowing the grade is massive advantage in onsighting. Obviously, we accept Ondra’s onsight of Just Do It as valid. This suggests that we do not prioritize the any prior information portion of the above definition as much as we seem to.

Instead, it would be more pertinent to say, “without much prior information.” This suggests that climbing a boulder problem first try, without beta and without touching the holds should also constitute an onsight. Let’s begin by talking about a situation where a bouldering onsight must be possible: highballing.

Highball boulder problems are functionally the same as sport routes. They take a climber 30 feet off the ground, or higher, and can be graded, and often are graded, by the Yosemite Decimal System. They often bare a bouldering grade as well. 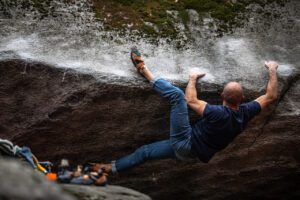 The only difference, much of the time, is that boulder problems exist on boulders and sport climbs exist on cliffs. Even this difference is interrupted by some of the world’s most famous sport climbs, such as those found on the Cacodemon Boulder.

As such, we find the only real difference is the addition of bolts or the potential for using gear. In either case, neither refutes the fact that the climbing is the same. As such, at least on climbs of similar heights, onsighting must be possible if onsights exist.

However, most of the time, sport climbs are significantly longer than boulder problems. The more interesting conversation is one surrounding low ball boulder problems. Adam Ondra describes onsighting boulders here:

“Boulder can be surely done onsight if it starts from a stand start. Onsighting a boulder with a sit starts is a bit different story, I don’t know what the opinion of the majority is but it would be wiser to call every first go in bouldering a flash. Additionally, I don’t really think that anyone takes onsighting in case of bouldering seriously. When it comes to flashing, I do think that touching the holds as high as you can reach from the ground prior to the ascent is absolutely OK and it is the consensus of most climbers.”

To Ondra, then, onsighting exists in bouldering. He notes that calling it an onsight may not be the most helpful idea. Instead, he argues that it is wiser to call it a flash. This portion of the quote is vague. Wisdom, here, appears to approach that which is factually correct.

Why not sit starts?

Ondra leaves us very little on this topic, but if we consider what he includes as a flash versus what is an onsight, we may learn what he means.

If a boulder can be onsighted as a stand start, then perhaps this is because it reflects a sport route. Almost all sport routes, except for maybe those with direct starts that climb into them, begin as stand starts. In this way, onsights are possible for stand start boulder problems because they fit the description previously outlined by sport routes.

Sit starts, then, detract from this standard definition. They differ from stand starts as they necessarily begin beneath eye-level. As such, a climber is given the opportunity to look at all of the holds quite easily. Sequencing becomes easier, and a person can more easily mimic the movement of the route. In these ways, onsighting the lower moves on a sit start should be easier than if the same movement existed as a stand start.

But is this enough to void the onsight?

Ondra goes on to discuss that which is allowed on a flash. He talks about how it is okay to touch the holds so long as you are standing on the ground. This comprehensive approach to sequencing differs from onsighting where limited previous information is given.

In this stylistic difference, touching the holds and receiving beta (another allowance of flashes), it seems we find the possibility of onsighting low-to-the-ground boulder problems and sit starts. Unlike the highball argument, this argument only identifies a major difference between flashing and onsighting. It does not necessarily allow for the possibility of onsighting sit starts. It does, however, ask the question: If I start from the sit, and refrain from touching any of the holds that follow, how does my first attempt differ from an onsight?

Given all of the allowances onsights are given in sport climbing, including the pre-clipping of first bolt, it seems that seeing the first holds in detail is functionally the same as staring at the lower portion of a sport route. 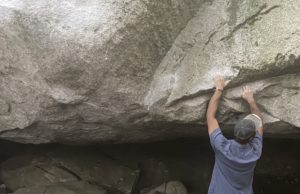 As such, it seems the difference between onsighting the sit start to a boulder problem and onsighting a pre-clipped, pre-hung sport route is best distinguished as a matter of discipline than anything else.

As bouldering functionally does have onsights, as seen in the highball portion of this piece, the starting height of the problem seems like a superfluous detail used to gatekeep the term between disciplines. Still, it is irrefutable that sequencing becomes easier when the climb occurs largely beneath your eye-line. However, this seems like a silly way to describe onsights in bouldering as people have different heights, allowing for degrees of onsight-ability in boulder problems. What is a stand start for one person could easily be a crouch start for another.

Would this mean that only the shorter climber who stood through the start earned the onsight on their first attempt? In all cases regarding climbing jargon, the answer is vague, but it does seem possible to onsight at least stand start boulder problems. Perhaps all it would take for people to onsight sit starts is approaching the climb with an onsight in mind.