Canada’s first National Park was established in 1885 as Banff Hot Spring Reserve. The name soon changed to Banff National Park and for the past 132 years, our national parks have played an important role is the growth of climbing.

That very first park was to protect the Cave and Basin Hot Springs, the place Alex Megos parked to walk up the trail to send Fightclub, Canada’s first 5.15 in 2017.

For the complete story of climbing in Canada’s Parks, pick up the 2017 June/July issue of Gripped magazine. 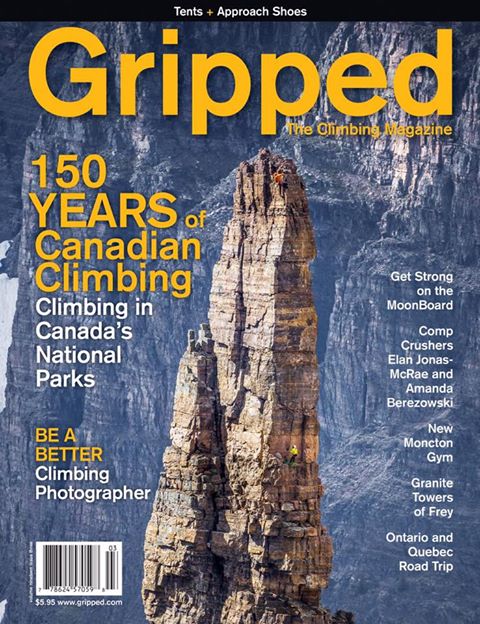 The following is a list of some of Canada’s National Parks with ice, rock or alpine climbing. For more on Parks see here.

Auyuittuq National Park on Baffin Island has some of Canada’s biggest walls and most remote adventures.

Bruce Peninsula National Park is one of Ontario’s most aesthetic areas with bouldering and Lion’s Head nearby.

Back in the land of beautiful Georgian Bay 🌅 Home sweet home. Though it is definitely not warm enough to boulder above an inflatable SUP in a 👙yet, I will patiently wait until it is! @arcteryx @lasportivana @sanuk @sunski #georgianbay #lakehuron #brucepeninsula #sup #standuppaddle #bouldering #c_l_i_m_b #homesweethome

Gros Morne National Park is a winter climber’s playground with dozens of massive waterfall ice climbs to keep busy on.

Cape Breton National Park doesn’t have many climbs but the ones it does are solid and fun multi-pitch adventures.

Banff National Park is one of the most popular for climbers looking for 5.14 sport routes and grade-six alpine lines.

Yoho National Park has good glacier climbs, long and loose rock routes and dozens of ice routes, such as the Beer Climbs near Field.

Kootenay National Park is loaded with potential and a number of popular scrambles, ice climbs, moderate alpine routes and cragging.

Jasper National Park has some of North America’s most inspiring north faces, such as the North Twin, Mount Kitchener and Mount Alberta.

Amazing day with friends at the Watchtower today! The most beautiful crag I have been to, EVER! Here is Dane clipping the last draw on Hot Carl! #jaspernp #climbing #rockclimbing #climbing_is_my_passion #cpc150