Allen Steck is an important figure in climbing, but one whose influence has never received as much recognition as he perhaps deserves not only for the many significant ascents he orchestrated or was a part of, but also for his role in expanding the literary conversations about climbing.

Having started climbing in the Sierras when he was 16 and now in his nineties, we are fortunate to have an autobiography finally released.

Steck’s climbing resume includes the first ascents of some iconic lines, including the classic Steck-Salathe on Sentinel Rock, in 1950 and the monstrous Hummingbird Ridge on Mount Logan in 1965, which still awaits a complete second ascent in its original form. But he also ascended classic steep routes in the Dolomites in the late 1940s, attempted Makalu in the 1954, made the first ascent of Payu in the Baltoro region of Pakistan and climbed in the Pamirs.

He’s also known for co-creating/co-editing Ascent, which was arguably one of the most significant climbing publications over its lifespan and one of the first to emphasize aesthetics in writing and photography. Providing a blueprint for more personal and introspective expression, Ascent seemed to capture those personal landscapes associated with the experience of climbing and has remained an influential reference to this day. Steck was also one of the early architects of the adventure travel business we regularly know today.

A Mountaineer’s Life follows a somewhat non-linear approach; it is grouped thematically and as a result moves forward sequentially from the formative climbing years (I loved his descriptions of these early adventures) into the big ascents, only to then jump back at a certain points to explore childhood and then some overall perspectives and reflections.

But that is perhaps appropriate in summing up the learning and observations of a man of Steck’s wisdom and experience at this point. We’re fortunate to have this autobiography and A Mountaineer’s Life is a very worthy addition to the bookshelf of any climber. 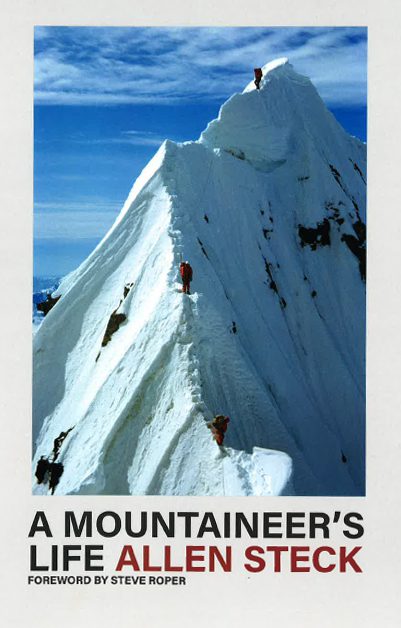