Storm Mountain at the intersection of the Trans Canada Highway and Highway 93 south to Radium in Banff National Park has long been one of the most-watched peaks in the Rockies.

Over the past decade, it’s become a popular early season peak for mixed rock and ice routes. The newest route is the 700-metre Eye of the Storm IV M6 WI5 by Ethan Berman and Maarten van Hearen. The last new route to be climbed was in 2017 by Ian Welsted and Simon Richardson.

“Thanks to Ian Welsted, we were clued into some current climbing potential on the lower flanks of Storm mountain,” said van Hearen. “Selling features on this route include cool ice climbing, great gear throughout and a 100-metre M6 quartzite mixed corner high on the route. Though not a true alpine route (no summit, tree-line climbing), it makes for a very fun day of mixed and ice climbing.”

Simon said he doesn't climb ice, but then we found some and he did.

The first route up the northeast face of Storm Mountain was climbed in 1988 by Ken Wallator and Tom Thomas at a grade of V 5.9 A3. The pair spent four days on the face and had three bivies of which the last one was partially hanging. The middle section involved six pitches of hard climbing up to A3 and finished up thin mixed climbing.

The Thomas/Wallator route has never been repeated, and in 2011, Wallator issued a reward for anyone who made the second ascent. “Hey, message from Ken here. If anybody repeats my and Tom Thomas’ route on the northeast face of Storm Mountain, I will personally buy you a new rope of your choice.”

Welsted and Richardson’s new moderate in 2017 climbed one of the unnamed ridges above Arnica Lake. They called it Unnamed Direct III M4 WI3. Richardson and Welsted climbed the line in -30°C at 2,700 metres. “The protection was good, the rock was generally excellent, and the climbing interesting despite not being very steep,” said Welsted.

Storm Mountain has a number of ridges that lead to its summit and over the years, other mixed routes have been climbed on them. In the spring of 1998, Chris Geisler soloed a new mixed routes called French Connection V M4+ WI4. That same year, Raphael Slawinski and Steve DeMaio made the first ascent of Extended Mix V M5 WI4+. It’s unknown if the climbs have been repeated.

Storm Mountain is on the continental divide in the Bow River Valley across from Castle Mountain. Its summit is on the border of Kootenay and Banff National Parks and therefore Alberta-British Columbia. The mountain was named by George Dawson in 1884 after witnessing a number of storm clouds on its summit.

Berman on Eye of the Storm 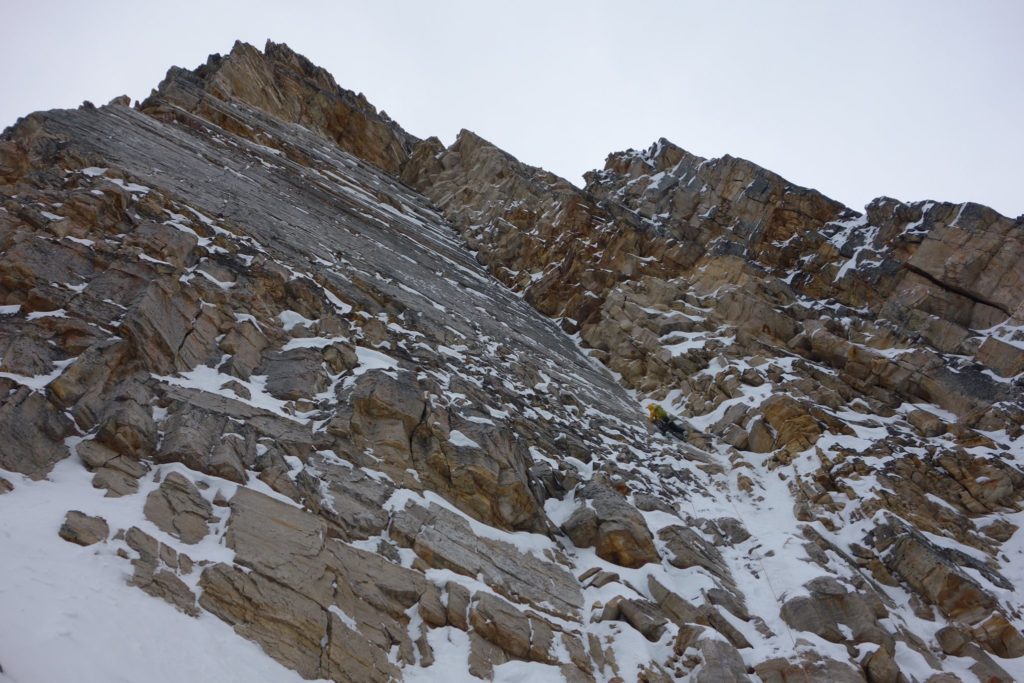 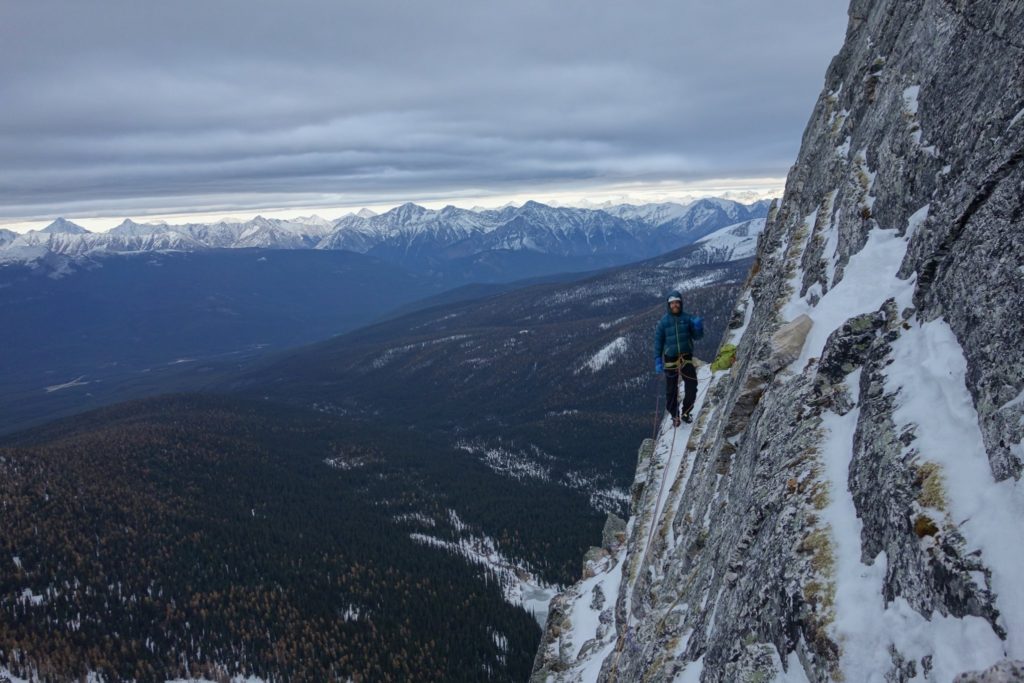 Berman on Eye of the Storm 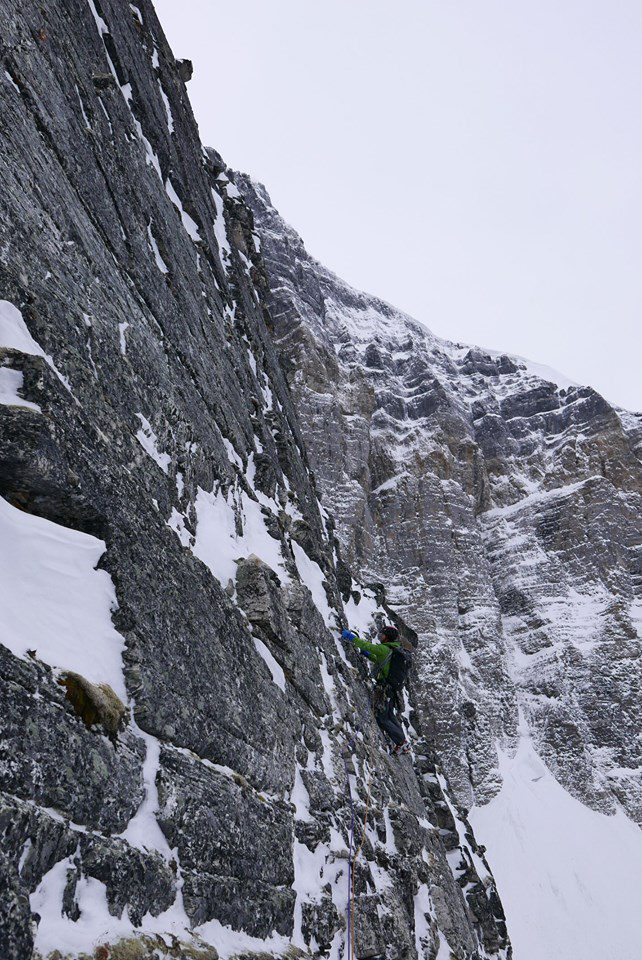 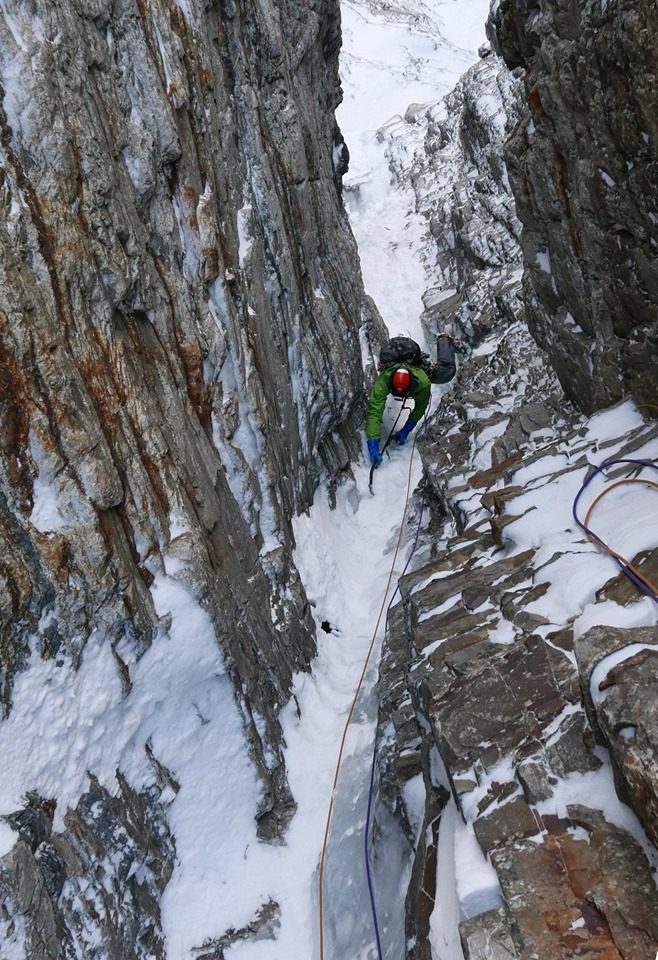 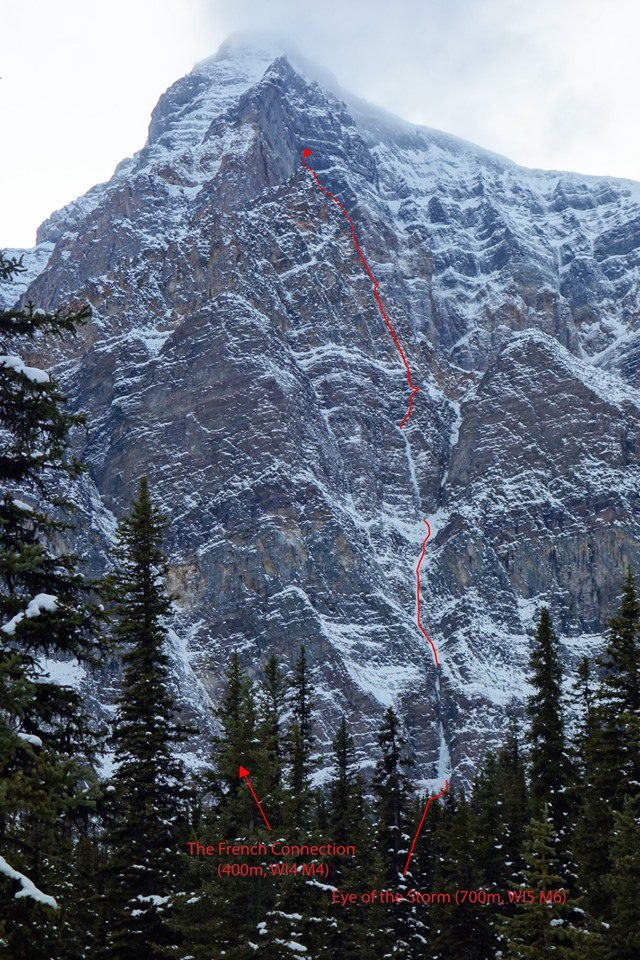 Topo of Eye of the Storm 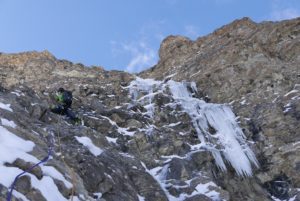 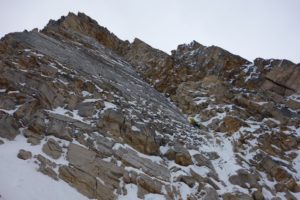 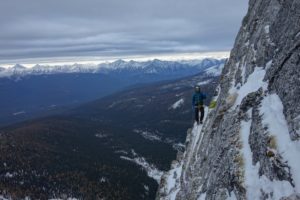 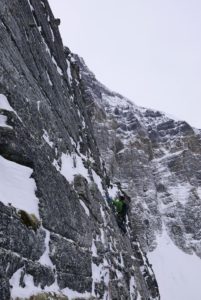 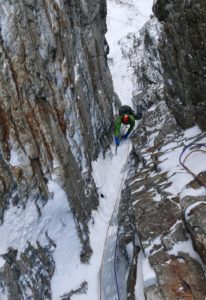 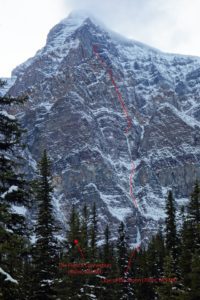 Approach: Hike to Upper Twin Lake, following hiking trails from 93S or Castle Junction (both 2:30-3:00 hrs). Hike N shore of the lake and approach route (1:00-1:30 hours from lake).
Rack: Cams to #3, hexes, pins (two angles, 4 KBs, 3-4 beaks), 10 screws (short and long), 12-14 draws. We thought we had 60m ropes, but they turned out to be 70s.
P1 WI3 70m: Climb easy ice to below steep pillar
P2 WI5 M6, 70m: Climb steep ice for 30m, pull a brief overhang (could be pure ice in good year) and continue up an aesthetic ice goulette, stretching the rope for a sheltered belay.
P3-5 WI3+ snow, 180m: Continue up snow and ice till below the next long ice drip (and a deep chimney on the right)
P6 WI3 M5, 70m: Climb a slanting groove (sustained at grade) on the R side of the ice, gaining the ice flow. Belay here or continue to the end of the ice.
P7 M5, 60m: The one scrappy pitch. From the end of the ice, follow chimney on right. Step onto a ridge notch, then step back left to continue to another ridge (good ledge/ridge belay). The upper corner should be visible from the belay.
P8 M5, 50m: Traverse right from belay and start up the striking quartzite corner. Belay on obvious ledge on right (save a 0.4 cam for anchor).
P9 M6, 60m: Continue up the corner on more great climbing and gear, through a small overlap. Exit corner, move up and R to small ledge and views of the NE face proper.
P10 M4 70m: Step right and continue up the blunt ridge.
P11 M5 70m: Follow a snow/ice gully on right to east ridge of Storm mountain.
Descent: As for east ridge of Storm Mountain. From top out, scramble briefly north and make one 30m rappel (slung block). Walk towards lower Twin Lake (traverse high), then meet lake at north end.