David Smart and I, (Brandon Pullan) have a tradition, a relatively new one, but one that will likely continue for many more summers. Smart, the editorial director of Gripped, flies to the Canadian Rockies for a few weeks every summer with his wife Katrina to establish new rock climbs.

Three years ago, we developed Godzilla, a four-pitch 5.9 on Kanga Crag South above the Grassi Lakes parking lot. Last year, we bolted MacLab Slab, a seven-pitch 5.6, and Gold Rush, a 14-pitch 5.7, on the North Ridge of Mount Rundle near Rundlehorn, a classic 11-pitch 5.6.

This year, we set our sights on a wall above the Banff golf course. The approach is only 15 minutes and the rock is generally solid. Peter Arbic opened a crag called the Golf Course Wall on the right-side of the up-to-300-metre face in the 1990s. Smart and I started left of the crag and worked our way east.

In the end, we established three multi-pitch climbs: House Mountain (5.9, all bolted, seven pitches), Yonge Street (5.8, all bolted, 14 pitches), and Georgetown (5.8, bolts/trad, 10-12 pitches). Below are the route descriptions, topos and name explanations. You can rappel all routes with one 60-metre rope.

If you head down the scree and stay close to the rock on climber’s right you’ll enter a bolted cave call The Patio. Climbers have been visiting here for a few seasons and there are a handful of climbs and projects. Someone added a sign to the tree to identify the area and some of the routes.

Warning: All routes are new and there’s a lot of loose rocks and rock fall hazard isn’t only real, you will be knocking small to medium sized rocks down when pulling ropes. Do NOT climb beneath another party. 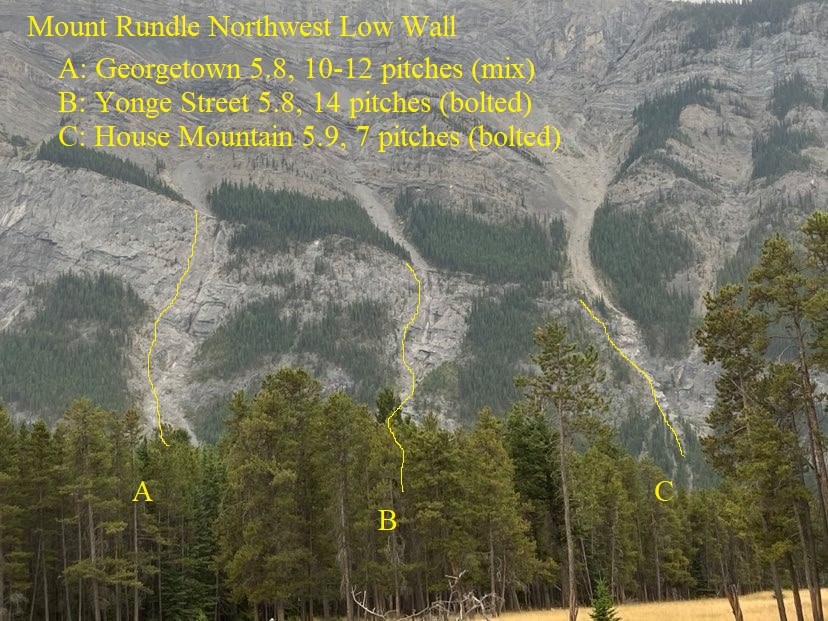 Mount Rundle is named for Robert Rundle, a Methodist minister. It was named in 1858 by John Palliser. Rundle was invited by the Hudson’s Bay Company to do missionary work in the area. He introduced syllabics, a written language for the Cree and only visited the Banff area twice.

The Cree name for Rundle is Waskahigan Watchi or House Mountain (not to be confused with Howse Peak on the Icefields Parkway). We named our new seven-pitch 5.9 all-bolted route “House Mountain” as a nod to the original name. 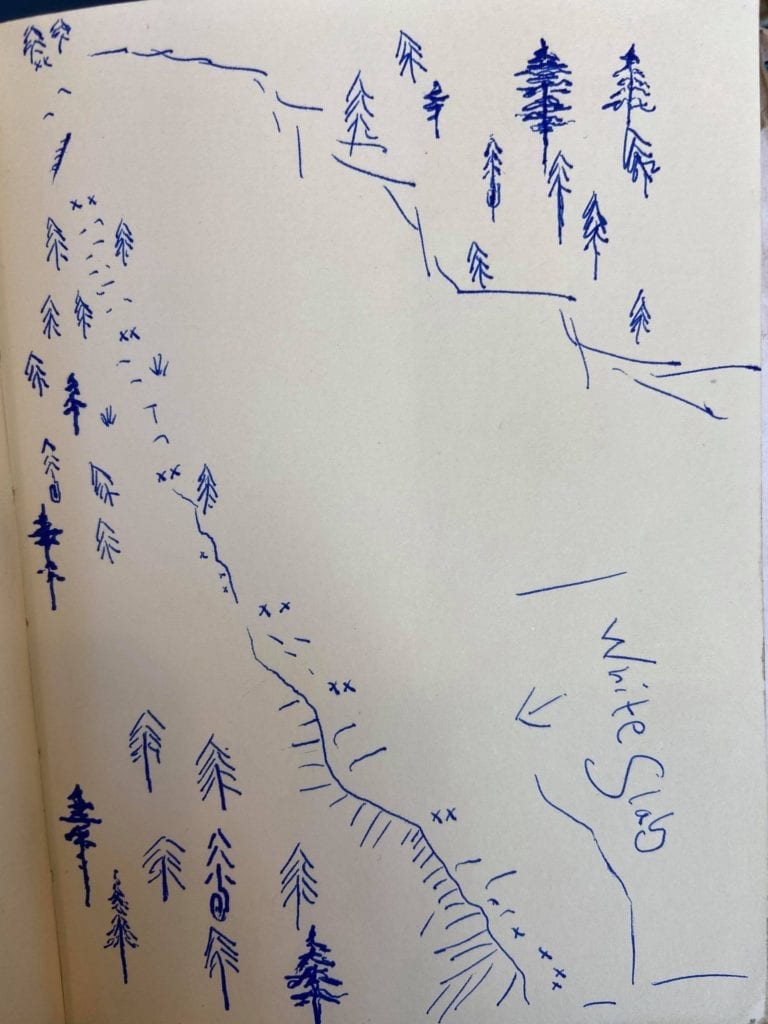 This is one of the most interesting routes on the west end of Rundle. It starts up a slab, climbs through cracks, up a scree slope and then follows grooves and ramps to the top of the wall.

We named it Yonge Street in honour of the late Chas Yonge, who was one of the Rockies most prominent route developers and cavers. He died of cancer earlier this year. He established local classics like Heart Line, a 19-pitch 5.9 on Heart Mountain, and wrote a guidebook to Kid Goat.

Back when Yonge was living and studying at university in the Greater Toronto Area, he established many climbs on the Niagara Escarpment. One was Baby Face, a 5.9 at Buffalo Crag, which had a crux protected by a tent peg. After we finished Yonge Street, we added a third-pitch variation that follows a fun 5.8 crack/slab which we called the Tent Peg Variation. Keep an eye out for the tent peg.

Like all multi-pitch rock routes in the Canadian Rockies, you should not climb beneath another party. Loose rock can dislodge from climbers or rope-pull in rappels. 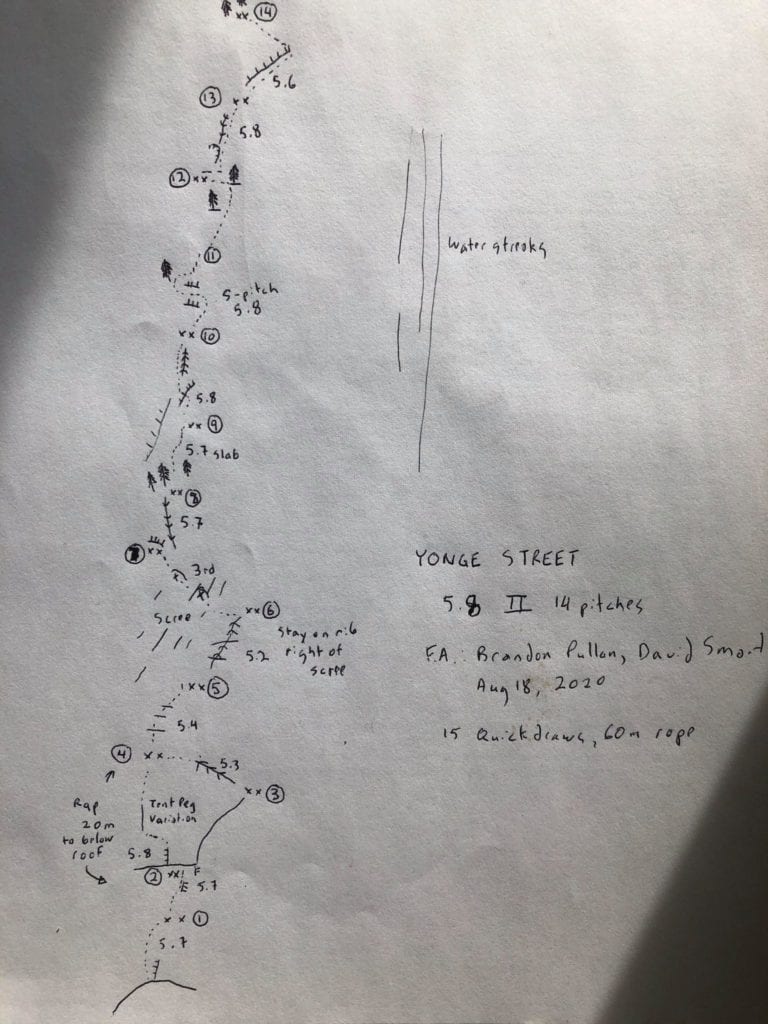 The Georgetown is a pub in Canmore that has dozens of photos of local climbers and some of their retired gear on its walls. It’s a legendary place where many of the world’s best climbers have visited for a beer after a day on the ice or rock.

This route climbs six scrappy pitches that gain the upper headwall. We’re calling the wall the Georgetown Wall in honour of everyone who hangs on the walls at the pub. There’s room for five big lines and, per the tradition, we’ll be returning next year to establish more.

Georgetown is 360 metres long, but most of the approach pitches can be simul-climbed. The route follows splitter cracks and bolted slabs. You need a single trad rack. You can rappel from bolted anchors with a 60-metre rope.

Gear: One 60m rope, single rack, 12 quickdraws, helmet
Approach: From the parking for Yonge Street, head straight up to the wall above. Stay to the right in the trees. Cut left to the lowest rock below the slabs.
Pitches one to six: Follow slabs and grooves and some OK rock. Belay off single bolts, slabs are bolted (3rd class to 5.5, 180m)
Find the single bolt above the large gully, below a corner
Pitch seven: Move up and right to splitter corner (good big cams) to a bolt. Move left on big holds to ledge (5.7, 30m)
Pitch eight: Move right up a slab past a crack (spot the bolt) and up the groove and slab back left (5.6, 30m)
Pitch nine: Up right through a groove and continue past right-facing cracks and up to ledge (5.6, 30m)
Pitch 10: Move right on slabs, passing cracks and spaced bolts. Fixed nut in corner, end on ledge (5.6, 30m)
Pitch 11: Head up left on easy terrain to base of corner (4th class, 30m)
Pitch 12: Head straight up the right-facing corner and move right onto slab. Back left to top (5.8, 30m)
Descent: Rappel six pitches to treed ledge. Walk into the forest east of the climb and descend down mossy trees. 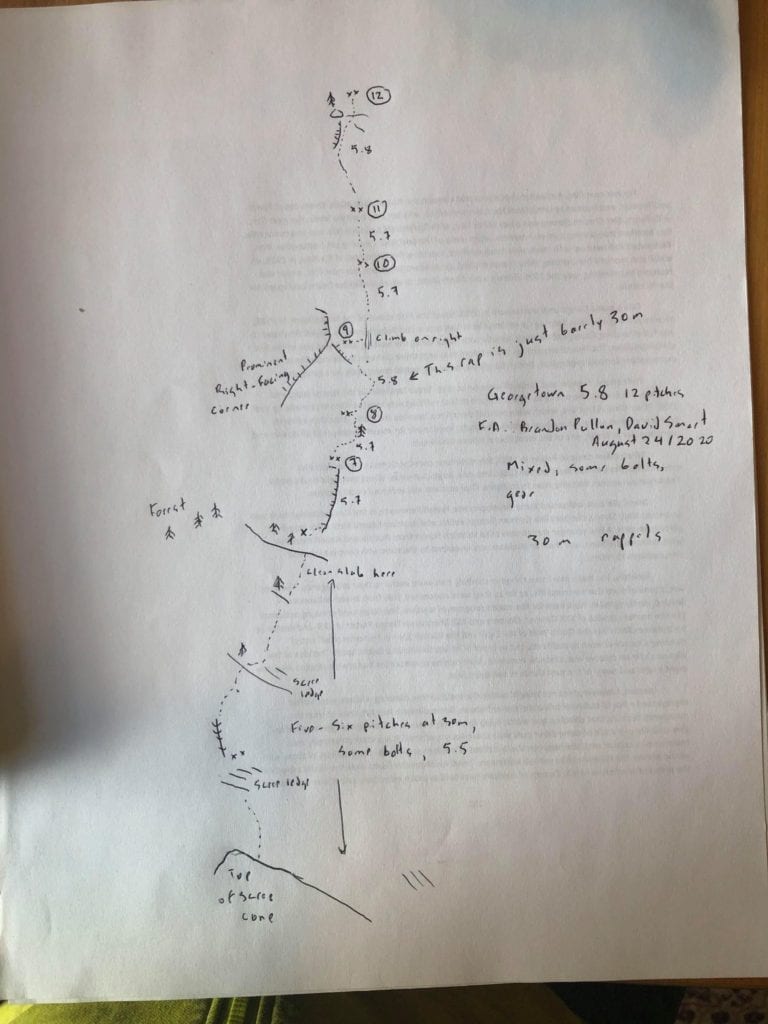