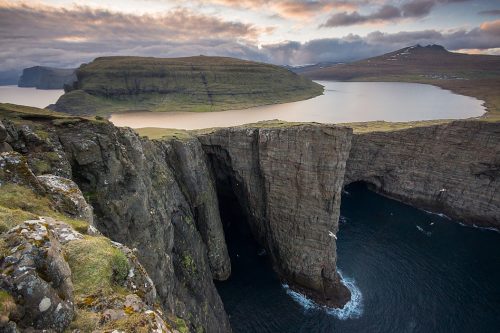 In 2017, James Pearson, Cedar Wright and Yuji Hirayama travelled to the Faroe Islands to climb the world’s tallest sea cliff at Cape Enniberg.

The Faroe Islands are a part of the Kingdom of Denmark, there are 18 main islands in the archipelago and with countless sea stacks.

“This is crazy, but basically the vikings used to throw slaves off this wall,” Wright while climbing a steep new route above the sea.

“Originally, my idea was to come to a place where nobody seemed to have been climbing before, or at least not climbing for pleasure” said Pearson.

“As it turns out, people have been climbing here out of necessity for hundreds of years.”

The team climbs amazing and steep new bolted routes before adventuring up the biggest sea cliff of them all.

“Like 5.9 grass or 5.10 grass,” said Wright. “My specialty, just grossly underestimating how heinous something’s going to be.”

Watch this great short film below.