Canada’s east coast finally saw sub-zero temperatures for long enough to start freezing flows in the Maritimes. In New Brunswick, the classic climb Cave Fever WI5 has formed enought to climb. It’s one of the oldest routes in the province, first climbed in 1978 by Colin Bell, Gilles LaCroix and Fred Doucette.

Another week of cold weather will help fatten up climbs at Folly and Halls Harbour in Nova Scotia. Climb Nova Scotia announced that they’re cancelling this year’s ice fest: “Given current restrictions on gatherings and the overall unstable world of in-person events, Climb Nova Scotia has made the difficult decision to cancel Ice Fest. While this is disappointing news, it is in the best interest of our climbing community. Thank you for understanding.”

Quebec climbers have been blessed with an outstanding season that’s seen a number of new WI6 routes so far, with all of the classic lines formed. Marty Theriault and Vincent Ulfhednars Boudreau climbed a new 110-metre WI4X at Topaz Wall this week. Climbs at Shawbridge were soft this week and look like a block of Swiss cheese. And Dominic Fernando De Oliveira reported that he took a 15-metre whipper onto a 10-centimetre screw with a Yates Screamer that ripped.

The Southern Ontario Ice Festival was scheduled to take place in-person in February, but it’s been announced that it will be a virtual ice festival.

Niall Hamill and Raphael Slawinski made the first ascent of Gasoline Alley, a 160-metre M5+ WI4 in Kicking Horse Canyon.

The other big news in the Rockies this week, besides Polar Circus WI5 700m being climbed and getting some new rappel bolts, was the development of the Mythos Crag by Andrew Abel and crew. Below is Abel’s online description and write-up.

Thanks to the David Thompson Climbing Association for providing bolts and hardware for this crag. If you climb in the David Thompson Corridor please consider supporting the DTCA and donate by going to www.davidthompsonclimbing.org. Any routes not specifically mentioned here or marked as closed projects on the topo are unfinished routes, please do not climb them, route development is still ongoing.

Directions: Mythos crag is located up Owen Creek on the edge of Banff National Park along Highway 11 (David Thompson Highway). Coming from Banff or Jasper – drive to the Saskatchewan river crossing along the icefield’s parkway. From the river crossing head east on Highway 11 5.9 km. You will park along the side of the highway right before a sign that indicates you are leaving the park. From Nordegg it is 86.4 km. Drive along Highway 11 until you hit the first sign that indicates you are entering the national park and immediately the creek will be on your right-hand side with a giant bear warning sign. Park next to the sign.

Approach: straightforward and follows the summer hiking trail up Owen Creek. The approach takes around 1.5 to 2 hours if the trail is broken in and 2 to 3 hours if you are breaking trail. Around 45 minutes -1 hour into the Hike you will be able to see the Mythos crag up high on the right hand side. Keep following the creek till you reach a spot with a cairn on the left and head into the trees following the occasional piece of flagging tape to a small slope beneath the crag. Hike up the slope and you will have arrived at your destination. There is Avalanche Hazard on the final slope on the approach which can be avoided by staying in the trees on the left as you approach the crag. Everything above and beneath the climbs is below the treeline.

Gear:12 quickdraws, 8-10 ice screws, and a 60 m rope. Note: a stick clip is essential for the harder mixed routes at this crag.

Caro Ouellet has shared a topo to a new drytooling crag on Vancouver Island. She said, “Join us there for some fun suffering, more likely at the end of the winter or while avalanche hazard is high.” 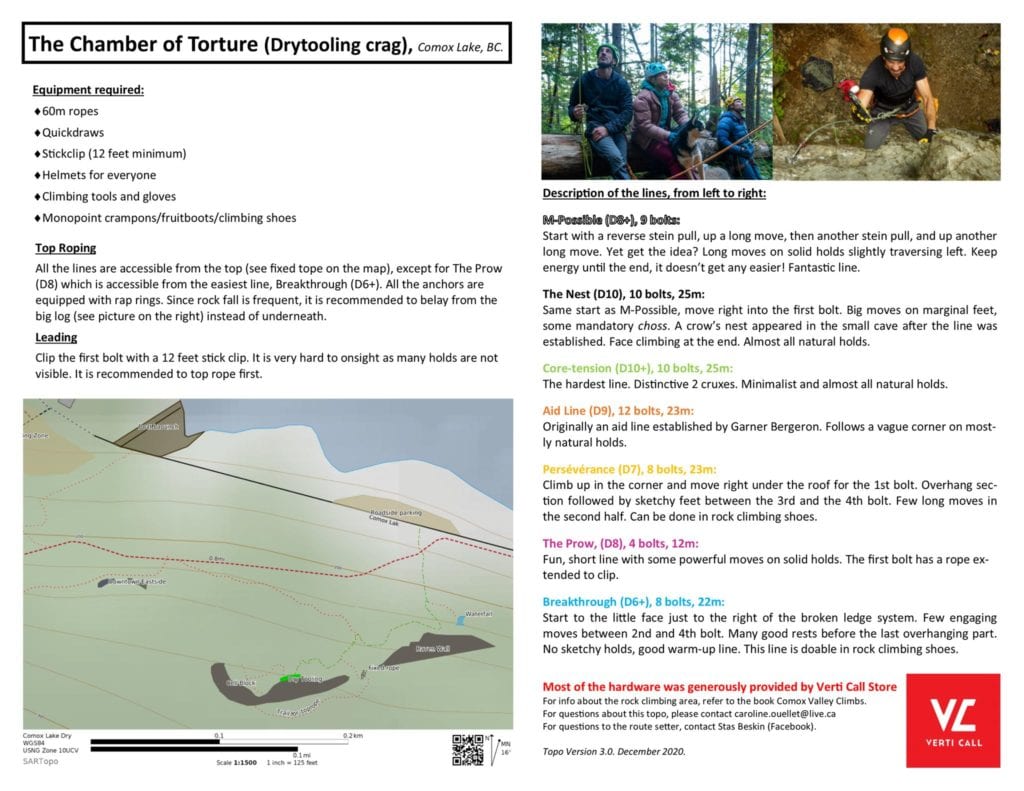 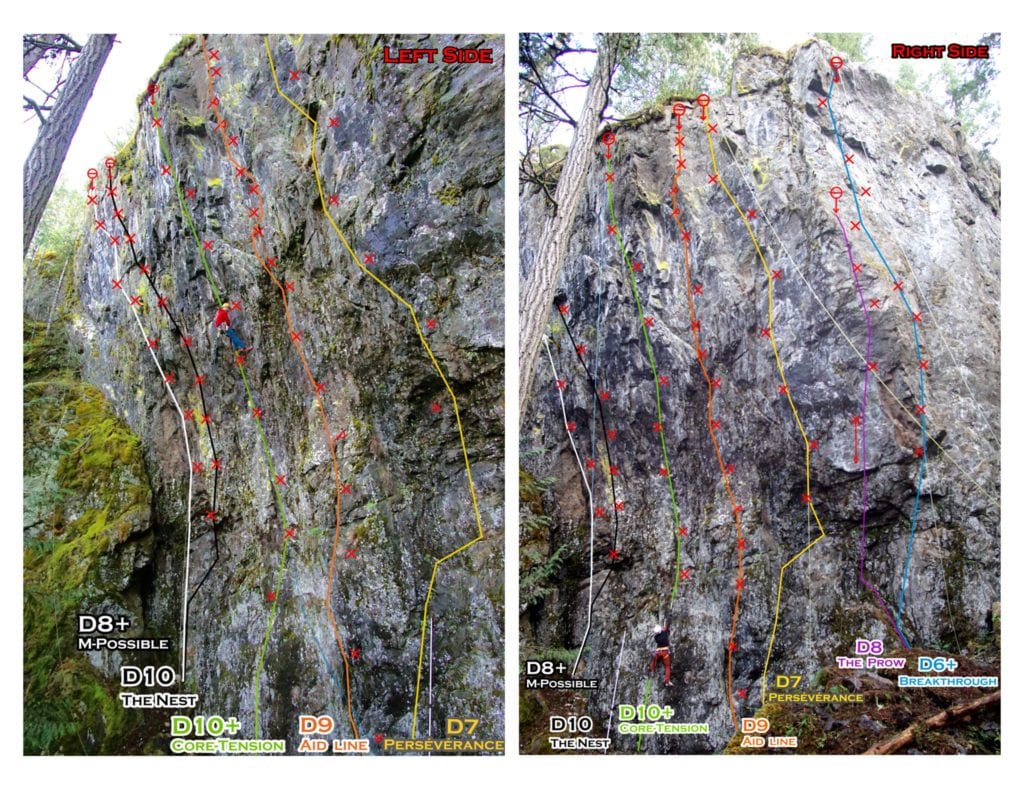